Can the Democratic Party Ride Fear to Victory?

A year and one-half ago, just as the primary Democratic Party candidates were starting their campaigns for President, I wrote in this journal a piece entitled “Candidates Looking for a Cause.”  In it I postulated the basic needs of voters had been so successfully addressed that the Democrat candidates would have difficulty finding a motivating cause sufficient to bring them a successful election against President Trump. 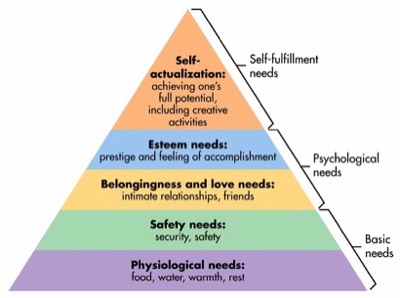 The coronavirus pandemic, coupled with the civic unrest unleashed by multiple blue-on-black killings, replaced a general sense of well-being among citizens with fear and anxieties on multiple levels as defined by Maslow.  Sensing the opportunity to grab success from the political jaws of defeat, the Democrat Party and its fellow travelers in the media and elsewhere began to amplify these fears and replace a controversial president with Good Ol’ Joe.

Citizens Sheltered-at-Home to Evade the Coronavirus Fear – Keying off administrative bureaucrats like Anthony Fauci, with the media spreading the fear of death, local Democrat politicians initiated one-size-fits-all sheltered-at-home diktats.  Universal wearing of masks forced all citizens into conformity under threats of official or community condemnation.

paycheck to paycheck with their ability to provide for their basic Physiological Needs.

• Highlighting coronavirus cases without putting them in context overexaggerated an individual’s Safety Needs.

With a population of 2.6 million plus,  Dallas County has had only 912 deaths, a statistic that is never

mentioned.  For this, we shut down the entire county based on the scare tactics of the County Judge.

their Belongingness and Love Needs.  Many no longer at work suffered from losing both their Esteem Needs

as well as their Self-actualization Needs.

The Democrat Gamble – Since the Democrats have no message that would generate a message that would be accepted by a majority of the voters, they are gambling that enough fringe voters will blame President Trump with creating their anxieties and that he is less able to correct them than can Joe Biden behind his black mask watching TV in his dark basement.

To promote this election gamble, the media sustains a continues assault against the President and his handling of the pandemic while Biden touts his coronavirus  program whose components have already been implemented by the President.  Repeat a lie often enough, sooner or later it will be believed!

The weakness in this approach is that Biden and the Democrats have no credible policies in history that would rebuild the devastated economy.

The other part of the Democrat’s gamble is that the social unrest and crime in many Democrat-run cities will end up being a plus for them.  They may be mistaken by so overtly fostering these Black Lives Matter protests which directly attack the Safety Needs of their citizens.  Somehow defunding the police does not seem to be a winning issue upon which becomes a third leg of their campaign along with the fear leg, and the bad-Trump leg.

Democrat’s Last Gamble – I think the back-room old heads of the Democratic Party know they still have a losing hand with a Biden/Harris ticket.  Their final gamble is by promoting universal mail-in balloting hoping they could control enough invalid ballots to steal a close election, if a close enough election can be maintained!

My earlier argument that the Democrat candidate of 2020 would be “without a cause” still stands.  The difference is that they can blame the President for each pandemic death and each black life lost.  The voters will decide whether they can grab victory from the jaws of defeat with Mr. Biden and Ms. Harris.